You may have not heard that in Hungary we put our family names first and first name(s) second. Hence, in my home country I am Mélykúti Bence. Of course, it's OK to call me Bence Mélykúti abroad.

Originally, I am from Budapest, Hungary, but I also lived in Oxford, UK for four years, and near Santa Barbara, California, USA for a year.

The next graph presents an insightful observation. If one looks at how old my schools were when I was attending them, one finds a striking thing. The Bányai was built in 1961, the Toldy was founded in 1854, Péter Pázmány founded the predecessor of the Eötvös University in 1635, and although the University of Oxford has never really been founded, the masters were recognised as a universitas in 1231. 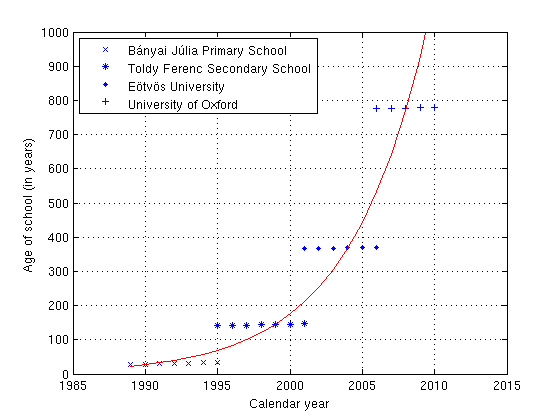 This is exponential growth: the red curve is the graph of the function f(t)=1,203 t-1972,1. (Linear regression applied to the logarithm of the age of schools. Don't worry about the 1972,1, it's not very important; it just gives a translation of the curve.) In other words this means that it takes approximately three years and nine months until the age of the school I currently go to doubles.

But the really interesting question is where I should go to once I leave Oxford in order to preserve this trend. In 2011 I should be at a 1343-year-old institution, and in 2013-2014 the age of two thousand years should be reached. But, what is actually this old? (This issue has been resolved by starting work!)

And finally take a look at my portraits which were taken in 1999 by my brother. There aren't many good photos of me. Beyond putative issues with how photogenic I am, I'm too often inclined to be on the other side of the camera to help others take better pictures.
[Back]